Though filmmaker Quinn Shephard starred in her 2017 feature directorial debut “Blame,” Shephard opted to stay behind the camera for her sophomore outing, the internet satire “Not Okay.” And she couldn’t have asked for a better proxy than star Zoey Deutch, a fearless performer with a bubbly presence that belies the complexity of the characters she often plays. The “Set It Up” star was immediately impressed with Shephard’s script, which offered her a new twist on the kind of “fascinating character” she loves to play.

Quinn is a very gifted writer. I was struck by how brave [her screenplay] was and how impressively tight it was. There were no loose ends. You read a script like that and it’s really hard to not want to play a part like that. Danni Sanders is a fascinating character,” Deutch said in a recent interview with IndieWire. “I was really excited that Quinn wanted to invite me in to the process of producing it alongside her and being her partner in crime.”

As Shephard told IndieWire, Deutch was always her first choice for the part, and she was extremely impressed by Deutch’s desire to get honest with such a prickly character. Other people, Shephard said, weren’t nearly as brave when it came to the film or its leading part, but Deutch was comfortable from the start. And why not? She’s made an art of it already.

As a lonely young woman caught up in a lie that spins out of her control, the part of Danni is oddly similar to Deutch’s role in “The Politician,” Ryan Murphy’s high school political comedy, in which she played a fake cancer patient, or the scam-centric feature “Buffaloed,” which casts her as a debt-collecting hustler. Though a very different project than the campy Netflix series or the black comedy, “Not Okay” also finds dark humor in over-the-top characters dealing with trauma.

The film opens with a tongue-in-cheek content warning advising viewers that the film contains “flashing lights, themes of trauma, and an unlikable female protagonist.” Though the characterization of Danni as unlikable was reinforced by audience feedback during test screenings, Deutch doesn’t see her that way.

“I’m much more interested and focused on relatability,” she said. “She’s in a constant state of being uncomfortable, because she just doesn’t know how to say or do the right thing. And she has no friends and yes, she doesn’t have friends because she’s privileged and unpleasant to be around. I’m not saying she’s a victim, but I am saying she’s lonely and misguided. … She’s the smoke, not the fire. She’s a product of her environment.”

When Danni’s plan to invent a writer’s retreat in Paris that she will “attend” by way of posting all kind of fake social posts quickly spirals into her “surviving” a horrible event, she suddenly becomes internet famous overnight. Initially, Danni’s scheme is inspired by her desire to interest Dylan O’Brien’s influencer Colin, but when Paris is the site of a tragic terrorist attack, Danni feels forced to pretend as if she was there, she survived it, and she’s got plenty to say about it.

As her follower count ticks up into the multiple thousands, Colin suddenly takes notice, just like everybody else in her life. Though the film can be read as a scathing critique of social media and internet fame, Deutch sees that as a vehicle to explore something deeper.

“The movie’s about a girl who is desperately seeking approval and attention from this boy, and it unravels because of that. Yes, she wants more followers, and yes, she wants to be famous. But that really comes secondary to her desire for connection and lack thereof,” Deutch said.

The film is broken down into eight chapters, dividing the ditzy grifter story into satisfying bite-sized chunks. Without giving too much away, the final chapter title promises that Danni will not get a “redemption arc.” According to Deutch, Shephard shot at least two different endings before landing on the film’s eventual conclusion, which shows some growth for the character without letting her off the hook. 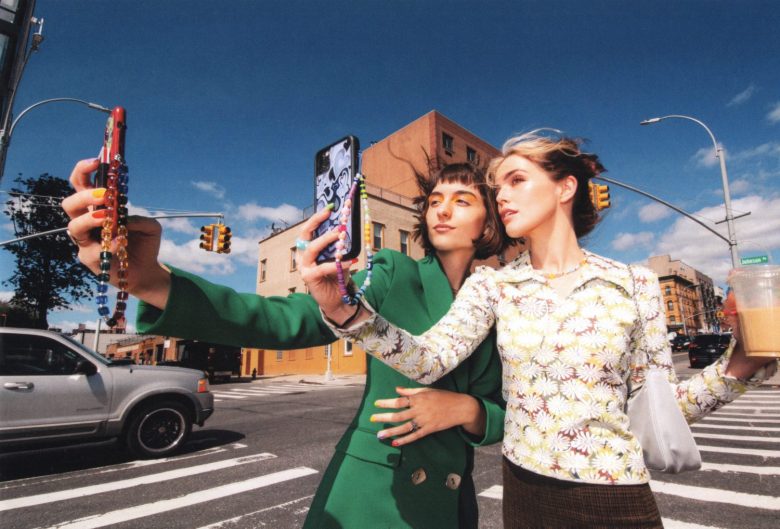 “She never says ‘sorry’ once, the entire movie, about anything, not even in passing, that’s not a word in her lexicon. And of course a lot of women have the opposite problem, right? They’re constantly saying ‘sorry,’ all the time apologizing for things that they shouldn’t be. Danni’s the total opposite. She never says ‘sorry,’” said Deutch. “It’s actually very funny, while we were shooting, I would sometimes say ‘sorry’ in passing, and we would have to be like, ‘Nope, Danni never says sorry!’”

In the final scene, Danni attends a performance by Rowan (Mia Isaac), a young activist she befriended under false pretenses. Though it still doesn’t contain the word “sorry,” she comes prepared with an apology on her phone.

“But the problem with this apology is it was never going to be for Rowan, it was going to be for Danni,” Deutch said. “It was going to be an act of selfishness to continue to try to insert herself in this poor girl’s life. And Rowan’s so much better off without her. And that was the growth in realizing, back the fuck off. And that ending felt much more powerful than some of the others.”

A Searchlight Pictures release, “Not Okay” is now streaming on Hulu.

Sign Up: Stay on top of the latest breaking movie and TV news! Sign up for our Email Newsletters here.