I’ve been investing since I was 14. Somehow, that’s the last 18 years (how can I be 32 already?). Over that time, I’ve always had a job and saved, read hundreds of books on investing, paid attention to stock market news, gotten degrees in finance, and more. TL;DR: I’ve spent a lot of time, energy, and money on the stock market.

To illustrate this concept, and to show how some of the principles I’ve followed in real estate investing would’ve improved my stock market returns, I’m going to compare two investments I made around the same time. In December, 2014, I bought a 600-square-foot condo with the intention of renting it out after living in it for at least a year. In February, 2016, I bought 100 shares of Annaly Capital Management (NLY -7.81%†, which is a mortgage REIT that often has a dividend yield over 10%. We’ll start with Annaly.

Annaly is a mortgage REIT (real estate investment trust). It borrows money and invests it in mortgage-backed securities that are usually guaranteed by the government. It makes money on the spread between the two rates. As long as its borrowing rate remains low and the mortgages it buys aren’t prepaid, it churns out cash to distribute to shareholders.

I bought the REIT as an income source. It had a high dividend yield and low volatility, so I sold covered calls on the position to juice the dividend yield. Here’s a table showing all the transactions I’ve had on Annaly since that first purchase:

Over the years, I’ve earned $566 in dividend income and $204 in option premium income from Annaly. The stock was called from me several times, and I usually bought it again soon after except for a two-year period where I didn’t own it (and missed out on some good dividends). It’s certainly possible that if I had ditched the covered call strategy and just held the stock the whole way, I may have made more money. Here’s what Annaly’s total return looks like since February, 2016. 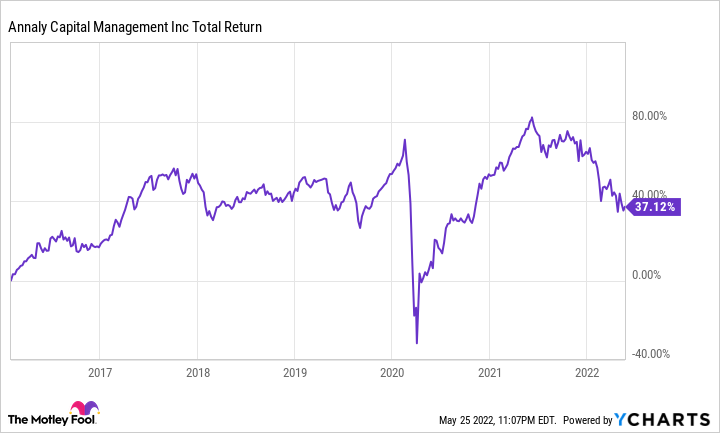 I purchased the condo in December 2014 for $90,000 with about $5,000 down (note that I’m using all round numbers for this example to make it simpler). I lived in it for over a year, which is required to purchase it as a residence, and then started renting it out.

Since I started renting the property, it has produced just over $12,000 in cash flow. My total investment is around $24,000 if you include the down payment and all the mortgage payments that I made prior to renting it out. That’s a 50% yield in five or so years. But there’s more to the return.

The real estate market has gone gangbusters in Utah, where I live, over the past five years. According to an appraisal I got in 2021, the condo is worth around $229,000 now. That’s good for capital appreciation of 154%, or 14.3% per year. But wait, there’s more!

I’ve been paying down the mortgage this whole time. For the first few years I paid personally, and that amount is included in the total investment of $24,000, but since it started renting, the tenant has effectively made those mortgage payments. Right now, the total debt on the property is $72,000. That means there is $157,000 in equity.

Of course, if 48% annual returns were in any way common with real estate investing, no one would invest in anything else. There were a few factors that worked out in my favor that won’t always (or even often) happen. Let’s go over them:

In addition to getting lucky on a few rental factors, Annaly hasn’t been a great investment. Even if I hadn’t traded around the position with options, a 39% total return over more than six years is a big fat meh.

We’ll finish with a modified scenario that’s a little more duplicable. Let’s say that you purchase a rental condo for $90,000 that receives $10,000 in cash flow and has market price of $150,000 after five years. Let’s also say that instead of investing in Annaly, you invest in prologue (PLD -7.51%†an industrial REIT that has performed better. 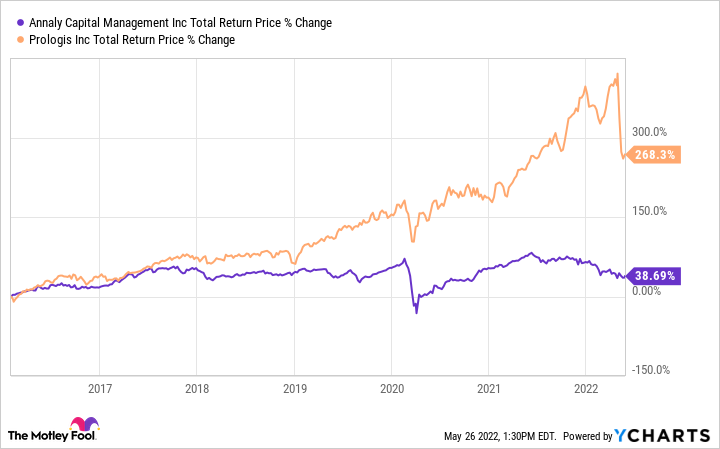 Both strategies can be very profitable — as long as you hold on. Moving in and out of my Annaly position probably halved the total amount of dividends I earned over the period. With Prologis, subtracting dividends would cut the return to 210%.

Now, an investor a pretty nice return by selling the condo. But then what? You’d have to pay taxes on the capital gain, miss out on months of rent, and then put the proceeds into a new investment. In stocks and rental property investing, it usually makes sense to hold for the long term.