This just keeps getting worse: Applications for mortgages to purchase a home dropped 7% for the week, and were down 21% from a year ago, the Mortgage Bankers Association reported today. An indicator of future home sales: Potential homebuyers try to get pre-approved for a mortgage, lock in a mortgage rate, and then start house-hunting.

Mortgage rates have soared this year, and home prices have soared for years to ridiculous levels, causing layers and layers of potential buyers to abandon the market, amid “worsening affordability challenges,” as the MBA called it. And these applications to purchase a home hit the lowest point since the depth of the lockdown in April 2020 (data via Investing.com):

The MBAs’s Purchase Mortgage Applications Index has now dropped below the lows of late 2018. By November 2018, the Fed had been hiking rates for years (slowly), and its QT was in full swing, and mortgage rates had edged above 5%, which was enough to start shaking up the housing market. Home sales volume slowed, prices began to come down in some markets, and stocks were selling off. But with inflation below the Fed’s target, and with Trump, who’d taken ownership of the Dow, constantly throwing darts at Powell, the Fed signaled in December 2018 that it would cave, and instantly mortgage rates began to fall, and volume and prices took off again.

Today, raging inflation is the #1 economic issue, and the Fed is chasing after it, with backing from the White House, and so this issue in the housing market is just going to have to play out.

The average 30-year fixed mortgage rate with conforming balances and 20% down rose to 5.40% this week, according to the MBA today, having been in this 5.4% range, plus or minus a little, since the end of April, the highest since 2009.

I call them holy-moly mortgage rates because that’s the reaction you get when you apply this rate to figure a mortgage payment for a home at current prices and then accidentally look at the resulting mortgage payment (data via Investing.com):

Turns out, sky-high home prices to be financed with holy-moly mortgage rates, plus uncertainty about the economy, dropping stock prices, and inflation eating everyone’s lunch make a toxic mix for homebuyers.

The percentage of people who said that now is a “bad time to buy” a home jumped to 79%, another record-worst in the data going back to 2010, according to Fannie Mae’s National Housing Survey for May. Sentiment has been deteriorating since February 2021: 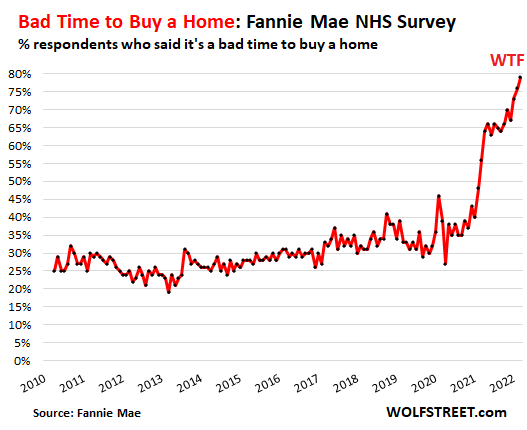 “Consumers’ expectations that their personal financial situations will worsen over the next year reached an all-time high in the May survey, and they expressed greater concern about job security,” according to Fannie Mae’s report.

“These results suggest to us that increased mortgage rates, high home prices, and inflation will likely continue to squeeze would-be homebuyers – as well as those potential sellers with lower, locked-in mortgage rates – out of the market, supporting our forecast that home sales will slow meaningfully through the rest of this year and into next,” said Fannie Mae.

The stock market is on the front pages every day. Only a small percentage of Americans own any significant amount of equities, but that doesn’t matter. Stock market declines, with many high-flying stocks plunging 70% or 80% or even 90% since February 2021, have rattled a lot of nerves. Which is in part why Fannie Mae pointed out, “consumers’ expectations that their personal financial situations will worsen over the next year reached an all-time high.”

The MBA also had previously pointed at the financial markets as one of the reasons for the plunge in purchase mortgage applications.

In the tech and social media sector, the big declines in stock prices have now triggered the first hiring freezes and a few layoffs. And this too – just the idea of ​​nirvana being somehow over – is shaking up some folks.

Sharp increases in stock portfolios, stock options from employers, or cryptos empowered potential homebuyers and enabled many to borrow against their portfolios to come up with down payments. This option has either vanished or is looking very shaky for many.

Applications for mortgages to refinance an existing mortgage dropped another 6% for the week, and have collapsed by 75% from a year ago, to the lowest level since the year 2000, according to the MBA’s Refinance Mortgage Applications Index. The MBA obtains this data from a weekly survey of mortgage bankers.

With these holy-moly mortgage rates, just about the only reason to refinance is to extract cash from the home via a cash-out refi (data via Investing.com): 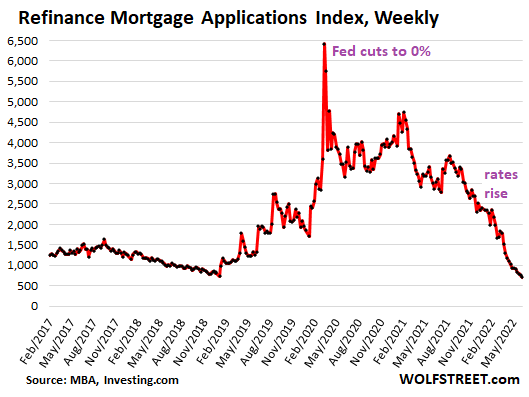 Cash out refi applications in week through May 30 (black line) plunged by 42% from the same week in 2021 and have stabilized roughly level with 2019: 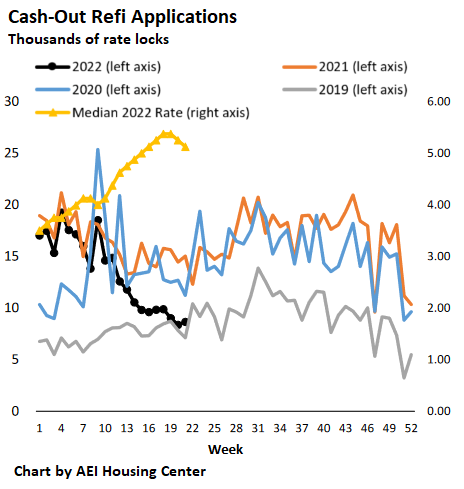 A cash-out refi provides a big lump sum for the homeowner to spend on all kinds of things, from cars to home improvement projects. They are also used to pay off high-cost debts, such as credit cards so that these credit cards can then be used for more purchases. The plunge in cash-out refi reduces the availability of these lump-sums, and therefore reduces the stimulus to the economy they provide.

Enjoy reading WOLF STREET and want to support it? Using ad blockers – I totally get why – but want to support the site? You can donate. I appreciate it immensely. Click on the beer and iced-tea mug to find out how:

Would you like to be notified via email when WOLF STREET publishes a new article? Sign up here.