shold investors be buying stocks right now? On the one hand, equity markets are down, and the world faces various economic and geopolitical issues. On the other hand, the stock market has a long history of recovering from downturns, and bull markets typically last longer than bear markets.

That’s why even in these troubled times, it is worth it to consider growing your portfolio. For those who have $500 to spare, let’s look at two excellent stocks worth buying now: Eli Lilly (NYSE: LLY) and apple (NASDAQ: AAPL)†

Many pharma giants have defied the stock market sell-off this year, and Eli Lilly is one of them. The company’s shares have climbed by 11% since the beginning of the year.

We can point to Eli Lilly’s strong financial performance as one of the reasons it has outperformed the market this year. The drugmaker recorded excellent (by the industry’s standard) top-line growth of 15% year over year to $7.8 billion in the first quarter. On the bottom line, Eli Lilly’s earnings per share increased by 41% year over year to $2.10.

The company has a list of solid therapies that contributed to its revenue and earnings growth. These include diabetes products Trulicity, Jardiance, and Humalog, cancer drug Verzenio, and immunosuppressant Taltz. Eli Lilly benefited from its COVID-19 antibody therapies as well. Trulicity remains the best-selling of the bunch with the medicine’s revenue jumping by 20% year over year to $1.7 billion. 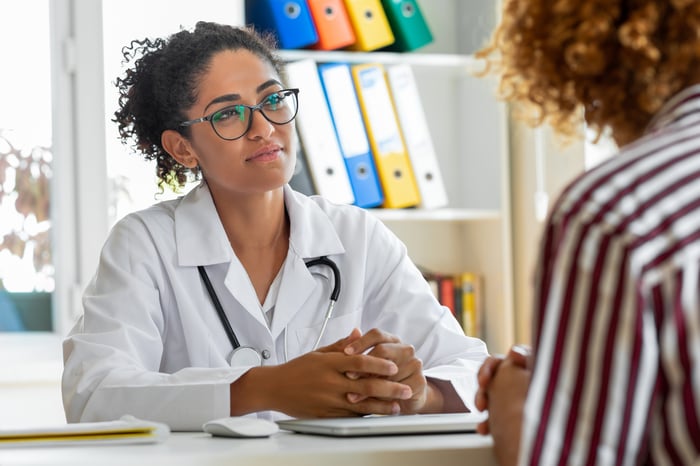 Eli Lilly has been one of the leaders in the market for diabetes medicines for a long time. And with a rising population of diabetes patients — not to mention the company’s history of developing novel therapies for this chronic illness — the drugmaker will likely remain one of the top players in this market. Eli Lilly boasts several exciting diabetes-related pipeline candidates and new approvals.

In the latter category, the US Food and Drug Administration (FDA) recently gave the green light to Eli Lilly’s Mounjaro to aid type 2 diabetes (T2D) patients with glycemic control.

Mounjaro could earn a label expansion in treating obesity. In a phase 3 clinical trial, patients taking the highest dose of Mounjaro lost an average of 22.5% of their body weight at 72 weeks of treatment. That compares favorably to the 2.4% average body weight loss of patients in the placebo group.

Eli Lilly is also working on Basal Insulin-Fc (BIF), a potential once-weekly insulin product for patients with T2D. And the drugmaker boasts pipeline candidates in other therapeutic areas, including a potential treatment for Alzheimer’s disease called donanemab.

With a good lineup, rich pipeline, and strong financial results, Eli Lilly is a solid healthcare stock buy even in our current volatile environment.

Tech giant Apple is facing issues related to the challenging economic climate. For instance, the company announced that supply-chain troubles would take a significant bite out of its sales to the tune of between $4 billion and $8 billion. That may be one reason behind Apple’s poor performance in the market this year.

But it’s worth noting that its financial results haven’t disappointed. During the second quarter of its fiscal year 2022, which ended on March 26, Apple’s revenue came in at $97.3 billion, 9% higher than the year-ago period and a record revenue for any of the company’s second quarters.

Apple continues to sell its popular iPhones, even while economic troubles such as inflation are also affecting consumers. During the company’s second quarter, iPhone sales increased by 5.9% year over year to $50.6 billion. Apple’s services segment performed well, too, with revenue from this unit jumping by 17.3% year over year to an all-time record of $19.8 billion.

Here are two reasons why Apple can continue delivering solid financial results and eventually return to its market-beating ways. First, the company has built a solid competitive edge. It benefits from a strong brand name and high switching costs. Apple routinely ranks as one of the most valuable brands in the world.

Meanwhile, the company’s ecosystem of interconnected devices and accompanying software and features make it difficult for its users to jump ship. For instance, a 2021 study found that iPhone users are the most loyal smartphone users, and the device boasts a retention rate above 80%.

Second, Apple’s services business keeps growing in importance. This unit boasts higher margins and will positively affect Apple’s bottom line in the future. As the company’s ecosystem continues to grow, so will its margins. That’s why investors should stick with Apple despite the headwinds it is currently facing.

10 stocks we like better than Eli Lilly and Company
When our award-winning analyst team has a stock tip, it can pay to listen. After all, the newsletter they have run for over a decade, Motley Fool Stock Advisorhas tripled the market.*

They just revealed what they believe are the ten best stocks for investors to buy right now… and Eli Lilly and Company wasn’t one of them! That’s right — they think these 10 stocks are even better buys.